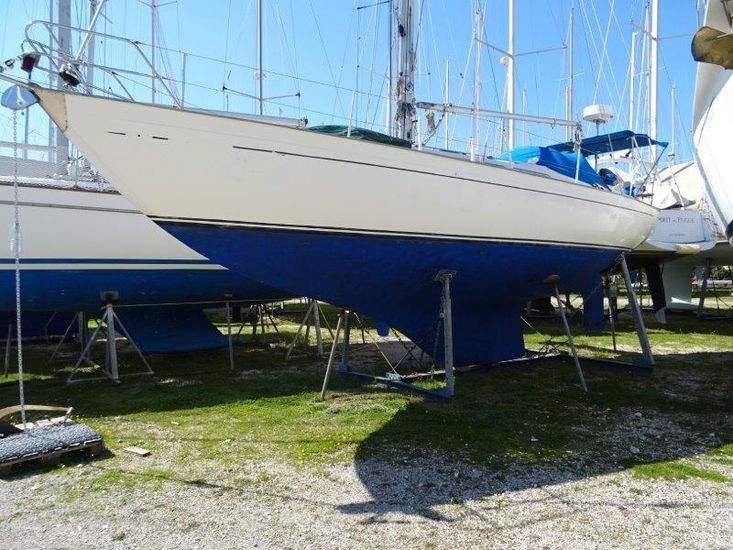 Heads
Larger than would be expected head runs athwartship with sliding doors fore and aft for privacy.
Full-sized porcelain sink with shower hose to the centre beneath mirror fronted vanity.
shower tray drains shower water straight out amidships, above the waterline, when the drain pump is activated.
To port is the Lavac head, backed by a cabinet for stowage of foul weather gear.
Head is plumbed to pump waste (via a Whale/Henderson Mk 5 manual pump) directly into a 25L holding tank (fitted in April 2018), in the cabinet behind the head.
Wastewater can then go, via a valve switch, either directly to sea or be kept in the holding tank, from where it can be either emptied directly overboard when off-shore or be pumped out via the on-deck pump-out access.

Saloon
Brown port and starboard seating surrounds the folding table amidships.
Ample stowage abides in the cabinets and below under the seating.
Access to the 80-gallon freshwater tank is via the large port under the teak sole.
The port is large enough to allow thorough cleaning of the tank seasonally.
4 reading lamps in the main salon.
Lee cloths are provided for all berths in both the main salon and the fore cabin.

Ventilation below deck is handled by the standard saloon and forward hatches (with a wind scoop hoisted when necessary), plus two dorade vents in the saloon, and a tannoy vent in the head.

Hull professionally treated for osmosis in November 2016 – April 2017 (in Cleopatra Marina, Preveza).
Treatment included sand-blasting to strip off the gelcoat, multiple washing of the exposed fiberglass to remove all evidence of acid and salts, drying, applying an epoxy barrier, filling and fairing, applying an epoxy outer layer, applying primer coats, and finally applying two coats of antifouling.
Anti-fouling renewed every year before launching.

Spade S100 (20kg) anchor with 60m of 10mm chain is managed by a 12V Lofrans 1000W Cayman 88 windlass with capstan. Chain feeds through the deck to stowage at the bow.
Kedge anchor, stowed on the pushpit, is a Fortress Anchor 3.2Kg FX11, with 3m of 8mm chain connected to a 50m reel & webbing anchor line.

Original canopy was replaced in 2011 with dark blue Sunbrella, when the bimini over the wheel was also installed. Current dodgers are new from 2017. Current plastic windows in the canopy will be replaced before the start of the 2022 sailing season.

Deck-mounted fuel and freshwater accesses are with double filler caps to ensure against contamination. The deck-mounted wastewater access is a single cap.

Helm station has a canted cork non-skid surface (being renewed before the start of the 2022 sailing season.

Removable teak cockpit table (fits into bracket in the cockpit when required, stowed
below when not in use)

The original B&G instruments have been replaced with Raymarine instruments (i50 speed/log in 2015, i60 wind speed/angle in 2017, i50 depth in 2018).
Original Necco autopilot (regularly serviced) eases the helmsman’s burden.
The radar is mounted on a pole on the stern starboard quarter, the display is at the chart table below.
(owners comment: I’m not sure how well it currently works, I haven’t used it for a couple of years).

Watermota Sea Panther 4-cylindar 34hp diesel based on Ford 1600cc engine is coupled to a Hurth Vee drive gearbox. Current engine is, (according the previous owners), a reconditioned one which they had installed in 2001 and which had about 500 hours on it when purchased in 2006.
Since then engine has been used for a further 2,605 hours during the current ownership.
Professionally serviced at the end of every season, (it has never once not started nor has it ever stopped in current ownership).
Easily manages 6kts through the water at 1,800-1,900 rpm.
Propeller shaft mates to a flexible coupling at the gearbox and drives a 2-blade prop.
Current Volvo shaft seal was installed in July 2016, when the cutlass bearing and Vetus rubber couplings were also replaced.

Standard sloop rig for a Mk V (I 43’ 3”).
Standing rigging was replaced in October 2017, using Python Wires made in Germany; it had been previously replaced in 2009.
Furlex 200S headsail system (fitted new in October 2015), and a single backstay with tensioner.
Spinnaker pole stows on deck on the port side, there is a track for it on the front of the mast.
Removable inner forestay was added in 2009, allowing the setting of hanked-on sails (normally the original No. 2 Jib) for better pointing upwind in stronger winds.
Top of the mast is a LED anchor light, fitted in 2017.
Stub bowsprit (40 cm) was added by the previous owners allowing the asymmetrical spinnaker to be flown and gybed more easily.

4 x 12V 100 AH lead acid batteries (all new in 2021).
Electrical system is currently being upgraded (April 2022) to 3 x 12V 100 AH lead acid batteries for domestic use and 1 x 12V 100 AH lead acid battery for the main engine starter, with a new master switch.
Shore power is currently being upgraded with a marine-grade external shore power socket fitted in the cockpit, with power going through a RCD.
Flexible (Photonic Universe semi flex) 150 watt solar panel was fitted to the top of the bimini in 2018. That, together with charging from the main engine when motoring (normally about an hour per day), provides sufficient power for all extended cruising needs, including running the fridge 24/7.

The condition or level of safety equipment on board is not to be negotiated on following survey. It is likely to be listed by most surveyors but is not structural or an integral working part of the vessel and is not to be used to further negotiate the price down after survey. We strongly suggest that for your own personal safety that when purchasing a yacht you provide new safety equipment rather than relying on second hand gear.

Should you become the new owner of this yacht then the responsibility to re-register or update official bodies for items such as EPIRB, VHF, MMSI or AIS becomes yours.

Trusted British Yacht Brokers, Established almost 40 years, specialising in Cruising and Blue Water yachts permanent offices in Lefkas Marina, Ionian Greece & Portsmouth, UK. We specialise in live aboard blue water cruisers. Experienced, Professional, Qualified All Brokers are Full Members of ABYA, we work to a code of practice with safe Clients bank Accounts and carry PI Insurance. As Agents for Allures Yachting & Garcia Yachts we represent a respected brand of blue water cruiser with Aluminium hulls, GRP topsides and Lifting keels. Experience our Service we sell yachts nothing else. Call us for a chat 00 44 (0)1329 827053

Please contact Williams and Smithells to book an appointment to inspect any yacht before you book flights or pay for travel. This is to ensure you have a confirmed booking in our diary with the right amount of time allocated to inspect the yachts you want. Our yachts are not all in one marina, yard or harbour and in season do change locations. To avoid disappointment, call or email before you make travel plans.

By contacting Williams & Smithells Ltd from this yachting portal or our website direct you are agreeing to providing us with your contact details relating to your interest in purchasing a yacht. We will use these details to contact you offering suitable yachts in the future. If you no longer wish to be send yacht details or promotional information please send an email stating you wish to opt out and be removed.

Boats for sale
by continent

Boats for sale
by country